skip to main | skip to sidebar

I HATE the WASHINGTON CAPITALS and CAP's FANS 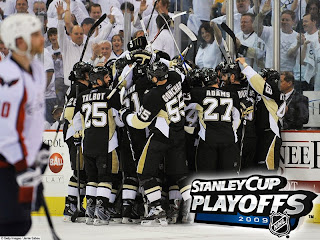 So, my sister and her close friend attended game 7 of the Washington Capitals/Pittsburgh Penguins semifinal series and they are Pittsburgh fans (so obviously adorned in Pittsburgh Penguins regalia). The verbal abuse which they suffered because of this at the hands of Cap's fans is better left unpublished(even on my blog)- basically a lot of words that rhyme with duck and have to do with a female dog in heat. Also, some large adult men felt it was necessary to make physical contact with my sister's friend. Wow, welcome to our nations capital where 2 young ladies can't even feel safe at a sporting event, because Cap's fans are neanderthals. When was the last time the Capitals made it to a Stanley Cup final? 1998. When did the Washington Capitals win the Stanley Cup? NEVER! Cap's fans can choke on my flipper (Just like the Caps did last night), because they will all be watching the Penguins go to the Stanley Cup finals while they are warming their couches.
Posted by Monty at 3:29 PM